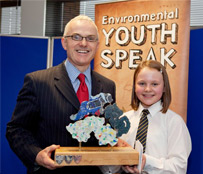 An 11-year-old pupil from Limavady beat off competition from across the country to grasp the Northern Ireland title of Environmental Youth Speaker of the year in the junior section.

Jade Murray, a Limavady Central P7 student, took the title after a spectacular performance and relay of her speech: “My rubbish – is it a waste or a resource?” The buddy 11-year-old wowed judges which claimed her victory over student entrants from all over the 26 council areas.

Environmental Youth Speak is an annual public speaking competition open to pupils throughout Northern Ireland. It encourages environmental awareness amongst young people, giving them the opportunity to research and debate current environmental issues. The well spoken 11 year-old gave her speech in front of Minister for the Environment Edwin Poots and UTV’s Frank Mitchell, who presented the event.