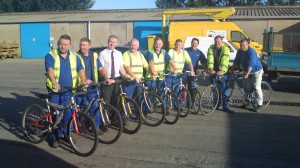 The recycling of waste in Limavady Borough has recently taken on a new dimension with Council’s Technical Services Department engaged in an initiative to divert unwanted bikes away from the waste stream and instead to needy charities working in Africa.

Council staff recently organised a charity cycle in aid of the Northern Ireland Childrens Hospice which raised a staggering £9243.70. With the concepts of Reduce, Reuse and Recycle in mind some of the cyclists made the journey from Limavady to Benone on bikes which had been removed from “waste” skips. These bikes were repaired and upgraded with very minor works, rendered fit for the road and reused to benefit NI Children’s Hospice. In fact some of the recovered bikes were in such good condition all that was needed was some oil and a seat adjustment.

Waste Management staff set out to prove the old adage that “one persons trash is another persons treasure”- just because we have no further use for items of “waste” does not mean these need to be dumped. Virtually all our “waste” has some value, the worth of these resources can be realised by ourselves and others through reuse and recycling. Council salvaged all bikes and parts of bikes at both Limavady and Dungiven recycling centres and were able to present 15 bikes for the event.

These bikes and others collected since are now being stored by council to be passed on to the Bike Aid for Africa charity, a group based in Co Down. Bike Aid for Africa will carry out any necessary repairs then send the bikes on to charity workers, doctors and the public in Africa. Our “waste” bikes will be put to good use once more for the benefit of others less fortunate than ourselves. This initiative has been well supported with council collecting bikes from all over the Borough. So far in the region of 30 bikes have been set aside for reuse and recycling.

To support this worthwhile cause and to reduce waste in the borough, council continued to collect bikes and parts of bikes until the end of September. Bikes could be brought to our sites at Ballyquin Rd Limavady and Chapel Rd Dungiven or until the end of the month. Council staff called to homes in the borough and collected unwanted bikes for free. For any queries regarding waste reduction, reuse and recycling in general contact the Technical Services Department on 02877760305 or [email protected].